I was extremely fortunate to be invited by Studio Animal Services to train the puppies again for the 2015 Budweiser Super Bowl commercial.  We trained the puppies for about three weeks, they were approximately 8 weeks old when we started, and then in the middle of December we headed up to central California to shoot the commercial on location.

Once again (and as always in past commercials) the amazing team of Budweiser Clydesdales were involved and being trained by Robin and Kate Wiltshire of Turtle Ranch in Wyoming, assisted by the ever present Budweiser ‘handlers’ – a team of great guys who make sure these horses want for nothing – who also assist Robin in the training.

I tried to take as many photos as I could, but my days were slammed with 8-10 hours of puppy training, 7 days a week right up until the shoot.  Luckily we had many people around who took some great photos as you can see in this post.

We had 8 puppies – all of which were trained to do various things that were needed for the commercial.  I was joined again by best friend and fellow trainer at SAS Deborah Dellosso – there’s nothing we enjoy more than training puppies!! 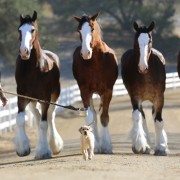